A couple of months ago, I packed a computer into a brown plastic bag of the kind usually used for trash. I then carried the carefully packed computer down to the basement. Physically, the computer still works. It is still beautiful (it is an iMac G4). It has been with me for the last ten years: I bought it second-hand in December 2002 from my friend Damien Doligez. I have used it for both work and entertainment for several years and then gave it to my computerwise-unsophisticated sister who has been using it since. The design much friendlier than later iMacs and even than earlier iMacs evokes the Luxo Pixar character. This computer was built to last: after ten years the white plastics are still white. I pick this insignificant detail not because I particularly care about the tint of my computing devices but because I don't. This is not an accident. People took care of the details when designing this computer all the way down to how it would look as it aged.

The iMac G4 came with the cutest matched loudspeakers. The integrated modem would not find much use nowadays but the computer also has USB firewire and ethernet ports and Wi-Fi. The thinking behind the integrated modem remains avant-gardist even if the technology is now outdated: this computer was the hub of its buyer's future digital lifestyle. It was intended to be connected and it was intended not to look like an untidy mess in your living room. 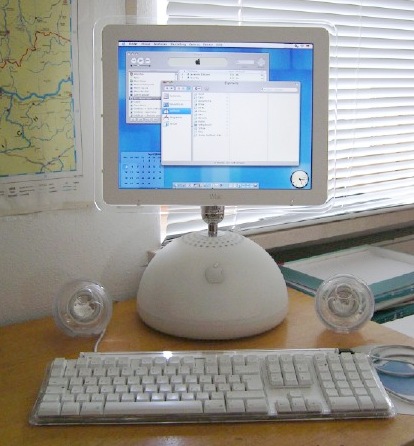 I opened it a couple of times to upgrade the hard disk and optical drive. It reminded me of the glimpse I once took as a student of the insides of a Sun workstation. I don't think I could explain this particular feeling to someone who did not see the inside of a Sun workstation—or of an iMac. As a concrete example that does not do justice to the experience the unused screw holes of the factory-installed optical drive I retrieved from the computer had been taped over so that air would not be sucked through the drive lest dust accumulate on the drive's door as years passed.

Unfortunately some functions mostly everyone expects from a computer nowadays is to display e-mail and web pages and this computer is no longer fit for this purpose. This isn't a case of running new software on old hardware. This has never worked but one used to be able to use loved hi-tech gadgets way past obsolescence as long as one avoided the mistake of installing new software on them. For lustra you could keep using the spreadsheet you were used to for accounting or your simple-but-sufficient word processor. Even games kept working!

The problem nowadays is that the option not to upgrade software is no longer available: software more than a few years old ceases to receive security patches. The iMac G4 in question cannot be upgraded past Mac OS X 10.4. On Mac OS X 10.4 Firefox cannot be upgraded past version 3.6. Firefox 3.6 received its last security update in March 2012 and has now joined the Great Repository in the Sky.

Here is an idea for 2013: how about making software that works? Of course it would not automatically adapt to new protocols but as long as the user was satisfied with the old ones this software would simply keep working. It would not have to be constantly updated with security patches because it would have been made right the first time just like hardware sometimes is.

I would not want to give the impression that I am unfairly picking on the fine developers of Firefox. Firefox 3.6 continued to be maintained long after Safari for OS X 10.4 had ceased to receive security updates. In fact the TenFourFox project a maintained variant of Firefox for precisely the kind of computer I took to the basement is a testament to the power of Open Source Software. Unfortunately there is no Adobe Flash support in TenFourFox and I fear that this might complicate the life of a computerwise-unsophisticated user.

Acknowledgements: besides selling me his computer Damien Doligez officially owned the first OS X-able mac I used as a PhD student. Harry McCracken suggested to liven up this post with a picture. Gerhard Piezinger photographed an iMac very much like mine and I used his picture.