On the previous post we’ve seen some recommendations about using Frama-C/Eva, and some tips about parsing. In this post, we will see how to run Eva, and how to quickly setup it for a more precise result.

We will reuse the save file produced at the end of the parsing, parsed.sav.

The default parameters of Eva are intended for a fast analysis. In Frama-C 14 (Silicon), option -val-builtins-auto is recommended to enable the usage of built-in functions that improve the precision and sometimes the speed of the analysis1.

1 This option will be enabled by default in Frama-C 15 (Phosphorus).

The following command-line should result in a relatively quick first analysis:

Note that we save the result in another file. It can be reused as input for another analysis, or visualization in the GUI.

Running Eva on parsed.sav will start the value analysis on the main function defined in test.c. Due to the large number of small functions in Monocypher, Eva will output a huge amount of lines, whenever a new function is entered. Adding option -no-val-show-progress will omit messages emitted whenever entering a new function.

Also, the fact that this code contains lots of small functions with few or no side-effects is a very strong indicator that -memexec-all will be very helpful in the analysis.

Memexec, which is part of Eva, acts as a cache that allows reusing the result of function calls when their memory footprint is unchanged. It dramatically improves performance.

Combining both options, we obtain the following command-line:

The analysis will then start and emit several warnings (mainly due to imprecisions). It should finish in a few seconds, depending on your processor speed.

After running the value analysis, it is a good time to check what the result looks like, using the GUI: 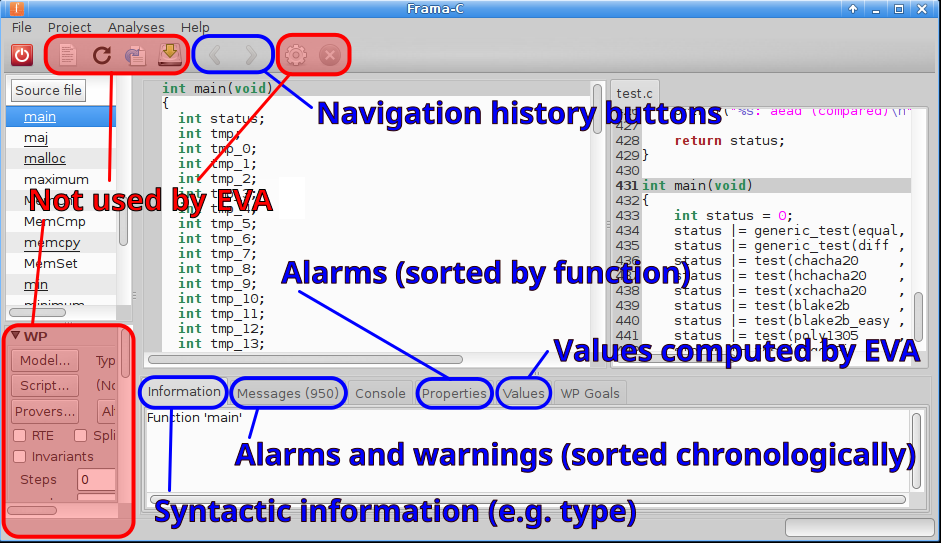 Note that the Properties tab (between Console and Values) is not updated automatically: you need to click on the Refresh button before it outputs anything, and after changing filters.

Several tips concerning this panel were presented in a previous post about the GUI. If you follow them, you will be able to make the Properties panel show the total of Unknown (unproven) properties for the entire program, and only those. This number is often similar to the number of messages in the Messages panel.

In Monocypher, after setting the filters to show every Unknown property in the entire program, and clicking Refresh, we obtain over 900 unproven properties. Since the analysis was not tuned at all for precision (other than with -val-builtins-auto), this number is not particularly surprising.

A quick way to improve on results is to use the Loop analysis plug-in.

The Loop analysis plug-in performs a mostly syntactic analysis to estimate loop bounds in the program (using heuristics, without any soundness guarantees) and outputs a list of options to be added to the value analysis. Running Eva again with these options should improve the precision, although it may increase analysis time. Loop analysis’ main objective is to speed up the repetitive task of finding loop bounds and providing them as semantic unrolling (-slevel) counters. The analysis may miss some loops, and the estimated bounds may be larger or smaller, but overall it minimizes the amount of manual work required.

Loop analysis does not depend on Eva, but if it has been run, the results may be more precise. In Monocypher, both commands below give an equivalent result (the difference is not significative in this context):

In both cases, Loop analysis’ effect is simply to produce a text output that should be fed into Eva for a new analysis:

You should, by now, use a shell script or a Makefile to run the Frama-C command line, adding all the -val-slevel-merge-after-loop and -slevel-function lines to your command.

Let us consider that the environment variable LOOPFLAGS contains the result of Loop analysis, and EVAFLAGS contains the flags mentioned previously (-no-val-show-progress, -val-builtins-auto and -memexec-all). Then the following command will re-run Eva with a more detailed (and, hopefully, precise) set of parameters:

Opening this file on the GUI will indicate approximately 500 warnings, which is still substantial, but much better than before. Improvements to Loop analysis in the next release of Frama-C will allow this number to be reduced slightly.

The basic tutorial is over, but there are several paths to choose

From here on, there are several possibilities to reduce the imprecisions in the analysis:

Each solution is more appropriate in a specific situation. Here are a few tips for an intermediate-level user of Eva:

The “beginner” tutorial ends here, but one thing that you may have noticed after running Eva, is the dreaded “non terminating function” message at the end of the analysis:

This indicates that, somewhere during the analysis, a completely invalid state was found, and Eva could not proceed. This usually indicates one of the following:

We will see how to handle such situations in the next post, using the GUI and the Nonterm plug-in (-nonterm), in a tutorial destined for beginners and experienced users alike.